Winter blackmouth fishing can be a challenge, especially if you don’t know the area. After moving to Sequim two years ago I began the fun task of learning new waters, specifically the Protection Island area. This great area is close to John Wayne Marina and offers some protection from wind.

The chart above shows the prime areas to fish Protection Island. The finger that extends from the SW side of the island holds bait which in turn attracts hungry blackmouth. A few anglers jig the area on an outgoing tide. When jigging start at the inside of the finger, in shallow water, which drops into the deep. During a perfect tide the drift will carry your boat across the prime zone marked in yellow.

Most anglers, including me, use downriggers to fish this area. On either tide troll the outside of the finger, marked in yellow, turn and troll back to the end of the finger. As you can see by the the chart, the prime catching zone sits at the end of the finger. Sometimes, however, trolling the inside of the finger will also produce fish. When fishing this zone keep baits and lures within 10 feet of bottom for best results. The finger area of Protection Island has a shallow area and deep area. While some fish are caught in the shallow area by jiggers and trollers, I have the best results while staying on the deep side of the finger. One of the tricks I use to keep me in prime water and on course is my GPS “snorkel.” The snorkel projects your boat’s direction of travel. I set my snorkel to one mile, giving me a nice straight line to enable me to stay on course. Some GPS units also have a time function setting for the snorkel. By choosing this function your snorkel will lengthen or shorten based on your boat’s speed. Either function works great and keeps you on track, and in the prime fishing zone.

During strong incoming tides, if the bite fails to materialize on the finger I choose a different, unconventional troll pattern. Currents will often force bait out of the prime outer finger zone, toward Diamond Point. When this happens I begin trolling with the current, into the mid channel region marked in yellow. And unlike the previous area, where it is crucial to be close to bottom, my downriggers stay in the 90 to 140 foot zone no matter what the depth reads on my sounder. As the currents push the bait into the center channel, between Protection Island and the Peninsula, blackmouth follow and will bite your offerings. You’ll likely troll faster here, which is just fine. As you can imagine, the bite will be aggressive because of your boat’s speed combined with the salmon’s aggressive nature of attacking baitfish from behind. I’ve taken several nice blackmouth without any other anglers within sight. Also, during an outgoing tide this tactic works when fishing Diamond Point. Just reverse the troll and head toward the outer finger.

Most of the fish taken on my boat, “Salmon Seeker” are taken on a 5-inch mini FAT Squid trolled behind a chrome dodger or my favorite flasher, the Silver Horde F4 Piscator flasher. Several colors work great, but my favorite is the glow/green spatterback. While fishing in Alaska at Whaler’s Cove Lodge last summer, these flashers out-fished ALL other flashers. Trust me on this, it was not even close. These flashers CATCH MORE CHINOOK SALMON — PERIOD! Silver Horde’s Rudder Flasher also dramatically increased my success rate. For four weeks I had just one rudder on my charter boat, until Silver Horde shipped me additional rudders. During that time, the downrigger that had the rudder caught 100 percent of the Chinook salmon.

In addition to mini FAT Squids, hootchies combined with a flashy twinkle skirt fly also worked extremely well when targeting Chinook salmon. A small strip of salted herring pinned to the top hook adds the perfect amount of scent to the combination.

Leader lengths: When fishing mini FAT Squids a 50 to 80-pound 24 inch leader works best. Stiff, heavy leaders work well because they make the lure snap back and forth like a fleeing squid and prevent broken leaders from aggressive bites and sharp teeth. Hootchie leaders can be longer and made of smaller diameter leaders, but not less than 30-pounds. I’m also fond of using high quality fluorocarbon leaders, which provide additional stiffness while rendering the leader invisible. 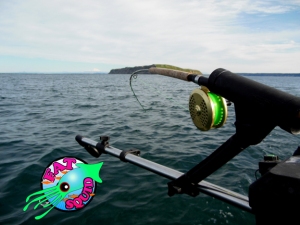 Best Trolling Speeds: Winter blackmouth salmon are immature salmon that move fast. Unlike mature king salmon, which often prefer slower moving baits and lures, blackmouth prefer faster moving baits. My speed over ground varies between 1.8 and 2.8 mph and sometimes hits 3 mph, depending on conditions. The key to speed is the action of your lure behind the flasher or dodger. If you are trolling slow shorten the leader behind the flasher or dodger. Also note, dodgers work great at Protection Island and will allow for slower trolling. When combining lures with whole or cut herring baits, dodgers impart action while allowing for slower speeds. Again, adjust speed and leader lengths to give maximum action. Typically I’ll use a 36 to 48-inch leader when using whole herring behind flashers and dodgers. Using both bait and lure on both sides of the boat allows me to combine techniques. Typically I’ll put a whole herring four feet behind the dodger at depth on the downrigger and an F4 glow/green spatterback flasher with a mini FAT Squid on a 24 inch leader on the other downrigger. Distance behind your downrigger ball also makes a difference. If you increase the distance behind the ball it will dampen the action because it will increase the diameter of the flasher’s roll. Shortening the distance behind the downrigger ball with decrease the flasher’s roll and increase the lure’s action. I prefer a distance of 12 to 20-feet behind the ball, depending on several factors that include tidal flows, boat speed, baits, lures and leader lengths. It takes lots of experimentation with your boat to determine the best leader lengths and distances behind the ball. Keep good notes of what works best for you.

Best Times To Fish Protection Island: I like strong tides, either outgoing or incoming. Heavy, fast moving tides concentrate bait which in turn makes it much easier to find blackmouth. During minimal tides the fish stay scattered, forcing anglers to search for schools of bait. During small tidal flows it’s best to stay close to the finger or outer edge of the finger because that is where the bait will likely be found. Again, when the tidal flows are strong don’t be afraid to explore the middle channel marked in yellow. And during any tidal flow, don’t forget to check the shallow bar that creates the Protection Island finger, as the bait and blackmouth will go shallow. When this happens keep the baits and lures close to bottom. 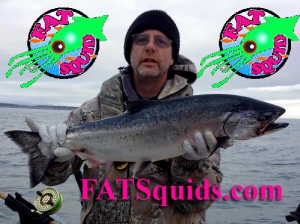 http://www.fatsquids.com is where to buy mini FAT Squids

If you are looking for mini FAT Squids check out FATSquids.com or Halibut.net