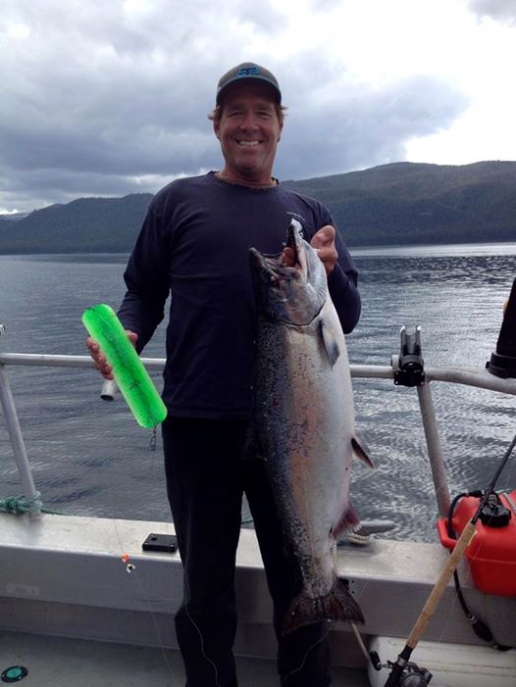 Today my first guests arrived, Ed and Glenn Mendell from the Bay Area of California. After catching limits of halibut we moved to Hood Bay, where a few big kings have been caught recently. Within a few minutes of arriving the starboard downrigger rod erupted with several violent shakes quickly followed by it releasing from the tight downrigger clip. Seconds later the line went limp and the hooks disappeared. New strategy, heavier leaders and bigger baits. Half an hour later the port rod popped off the rigger and the tight drag spun off the reel. Glenn tried to free the rod from the rod holder but the fish’s run prevented him from getting the rod out and in his hands. This time the fish just came un-bottoned, leaving a pearl white Kingfisher spoon dangling in the water. Hit three also bounced off the downrigger and left no hooks. Uhmm? Must be big fish or salmon sharks in the area.

This time I switched to 40 pound leader with two 6/0 hooks on a five foot leader and tied it to an Silver Horde F4 Piscator spatterback green/glow flasher. Five minutes later the reel spun off the reel, the rod buckled toward the water, fish on! Glenn grabbed the rod and expertly fought the fish to the back of the boat and my landing net.