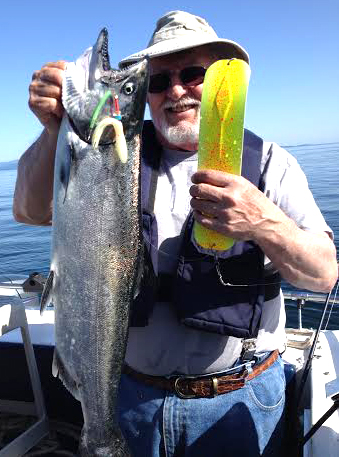 Last Friday Area six salmon fishing rules changed from two fin clipped 22-inch or bigger Chinook to just one fish. When the WDFW sent out their press release, they noted that anglers had already reached 71% of allowable “encounters.”

In a nutshell, every time an angler has an encounter with a Chinook, either releasing a wild Chinook or undersized Chinook it counts toward the 2,586 encounters by sports anglers. The state relies heavily on fish counts at local marinas and boat launches. So, every time someone “encounters” a fish checker and brags about their fishing prowess, which may or may not be accurate, each fish verbalized to the checker counts against our Winter Blackmouth season. Honesty then, can hurt or help our Chinook seasons depending on the angler. While not advocating dishonesty about “encounters” I would suggest anglers be more wise while fishing and while at dock, speaking to fish checkers. First off, don’t use teeny, tiny lures — they catch more sub-legal fish. Target bigger fish with bigger lures. You won’t get as much action, but that’s the point. When you get a bite it will likely be a keeper sized fish over 22-inches. Lures should be at least 4.5 to 5 inches in length. Fast trolled plugs also help to avoid short salmon.

When speaking with the fish checkers use common sense and be honest about your catch.

Anglers limited to 1 Chinook per day in Marine Area 6

Action: The daily catch limit for Chinook salmon in Marine Area 6 (East Juan de Fuca Strait) will be reduced to 1 fish, with a 2 salmon limit. All wild Chinook salmon must be released.

Reason for action: Before the salmon fishing season started, WDFW and tribal co-managers agreed to a limited number (2,586) of Chinook encounters – retaining or releasing fish – anglers are allowed in Marine Area 6. Preliminary estimates indicate that anglers have reached 71 percent of those encounters. The fishery is being modified to control impacts on stocks of concern.

Other information: WDFW will continue to monitor and evaluate the fishery in order to help maximize fishing opportunity is available for Marine Area 6. Anglers are reminded that they must continue to release all wild chinook.

John Beath is a writer, photographer, videographer, blogger, tackle manufacturer & Captain at Whaler's Cove Lodge in Southeast Alaska. He is also owner of www.halibut.net and host at Lets Talk Outdoors @ www.youtube.com/jbeath
View all posts by John L. Beath →
This entry was posted in Uncategorized. Bookmark the permalink.