For years Chinook fishing in Puget Sound has been subject to the Endangered Species Act restrictions imposed on Puget Sound rivers and streams. Fisheries managers have long claimed that these rivers had runs of “Native” Chinook. Others believe any river system that has been influenced by hatchery stock no longer has a pure native stock of Chinook. Dave Croonquist recently discovered years worth of Washington State hatchery planting records that prove how WDFW planted Chinook from various hatcheries throughout the region. For example, Green River Chinook Hatchery has moved 40 million Chinook out of the Green River basin to other river systems throughout the years in an effort to boost Chinook populations. In another example, when the Lower Elwha Hatchery first opened then Governor Rosellini was invited to cut the ribbon during opening ceremonies. When fisheries managers realized the hatchery barely had any fish they imported fish from other hatcheries to make it look good for press.

NOAA has been doing research for years with the goal of saving and managing Chinook salmon. In July 2006 NOAA published the Independent Population of Chinook Salmon in Puget Sound study. The study is fascinating but proves what many have been saying for years, that native stocks of Chinook throughout Puget Sound have largely become extinct. Below are two images tables taken from the report. Some of the rivers listed are driving our sport fishing seasons or lack thereof because of fear of intercepting these native stocks. However, if no such native Chinook stock exists why are fisheries managers continuing to manage the Puget Sound sport fishing seasons based on faulty science? 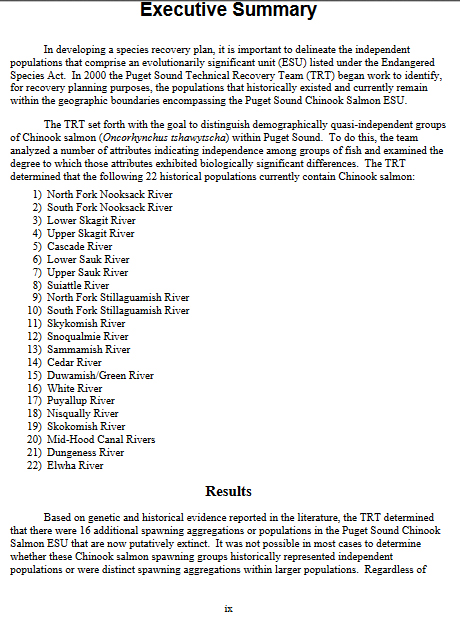 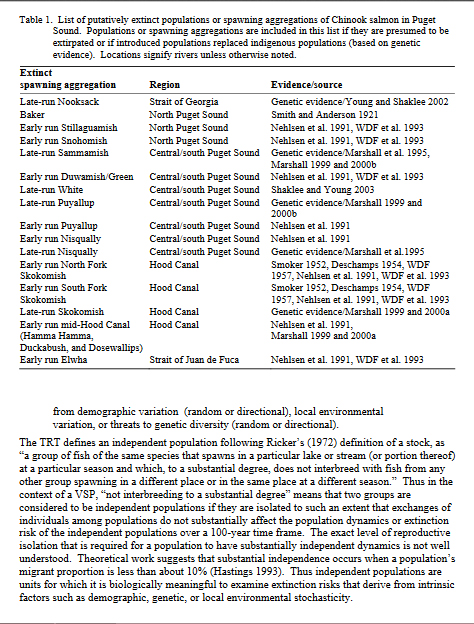 Link above is the NOAA 2006 Chinook report

The link above is the PDF prepared by Puget Sound Anglers concerning the history of Chinook transfers from hatcheries and how it effects fisheries policies.

The link above is the Brannon afs hatchery study.

Based on all of this information our fisheries managers should begin a new approach in Chinook fisheries management. Instead of continuing down the same old path of “Native” vs. “Hatchery” we need to embrace what has actually happened to Chinook salmon. When hatchery fish are introduced into a river or stream system a percentage of them will spawn naturally. These “natural spawn” Chinook don’t have adipose fins but they are still the progeny of hatchery stock. In fact, ALL hatchery stock Chinook at one time came from native Chinook stocks. A Chinook, is a Chinook is a Chinook.

Recognizing this fact will speed up our Chinook enhancement and recovery efforts which will in turn result in higher numbers of Chinook via the hatcheries and will help the starving orca whales that need our help now. Given the evidence listed above our fisheries managers, legislators, governor, sports anglers and general population should all embrace and support this line of thinking, I hope. In the meantime, I will now refer to natural spawned Chinook as “Undocumented” Chinook. Maybe if we approach the issue from a PC standpoint we can get past the arguing and increase Chinook hatchery production now.

John Beath is a writer, photographer, videographer, blogger, tackle manufacturer & Captain at Whaler's Cove Lodge in Southeast Alaska. He is also owner of www.halibut.net and host at Lets Talk Outdoors @ www.youtube.com/jbeath
View all posts by John L. Beath →
This entry was posted in Uncategorized. Bookmark the permalink.